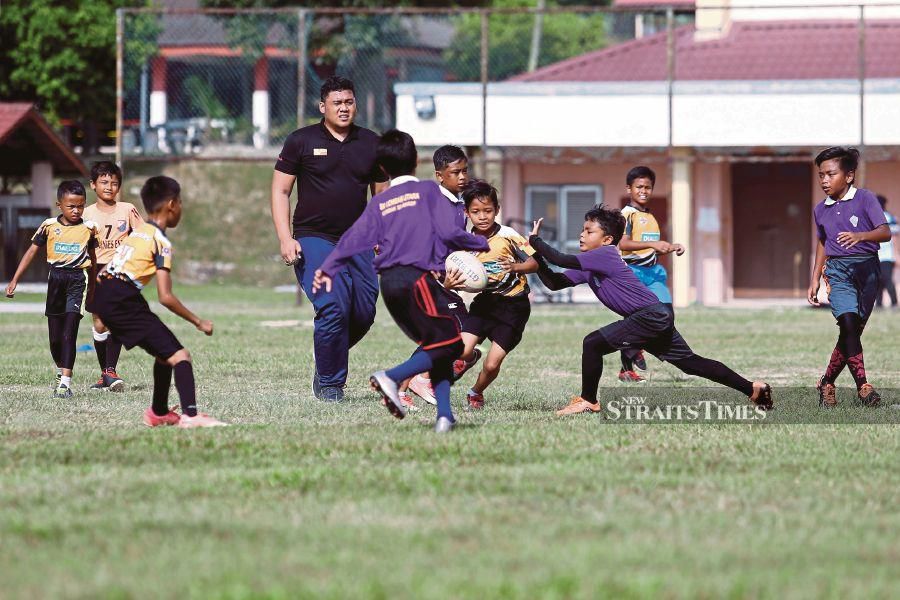 RUGBY-loving primary school teachers Emir Din Baharudin and Muhamad Fadhli Othman are just what the country needs when it comes to grassroots development.

They are the type of people who have the enthusiasm and dedication to build the foundation of the sport in Malaysia.

Emir, 29, and Fadhli, 28, have sparked a rugby revolution among their students at SK Bukit Lanjan in Bandar Damansara Perdana, which is a school for Orang Asli children.

So committed are the two teachers that they even went to the homes of the players to cajole them to attend training after they turned moody and refused to go.

The Bukit Lanjan’s rugby team, who are named Lanjan Tigers, have been mauling the opposition since last year.

Last year, the Lanjan Tigers captured the Magnificent Sevens Under-10 Cup in Shah Alam, emerged district champions in the MSSD Petaling Utama Under-10 Cup and also won the Wawasan Cup Under-10 title in Seremban, which is a national level tournament.

The icing on the cake for them came last year when they came out tops in the Orang Asli Sports Championship Under-12 title.

Emir, who heads the school’s rugby programme, said it has taken time for the Lanjan Tigers to grow.

“SK Bukit Lanjan was our first posting after we finished studying and we decided to start a rugby programme there in October 2018 as we both love the sport,” said Emir, when met prior to the Tigers friendly match with SK Gombak Utara recently.

“When we started, there were only six pupils in the programme but it slowly started to gain popularity. Today we have about 30 boys in our pool of players.

“We also recently started a programme for girls as well, as there are more girls than boys at the school, and we have 15 girls training now. All but two of our players are orang asli.

“At first we always came in last when we joined tournaments but we have started winning since last year. It is good to see the players progress.

“We train everyday on the weekdays, we never wait for a tournament to come before we start training.”

Emir said grooming the Tigers, who are supported by Dialog Group Berhad’s MyKasih initiative, has been challenging yet highly rewarding.

Students from SK Bukit Lanjan are all Temuan, a Proto-Malay ethnic group, and their physical appearance are similar to Malays.

“We are very grateful to Dialog Group Berhad as they have sponsored our equipment needs and also our travelling expenses when we play in tournaments.

“They (players) can be a bit moody, sometimes only five or six of them turn up for training or tournaments. When that happens, we both go to their houses and pick them up.

“All of them actually live within walking distance to the school in Desa Temuan.

“Just like any other children, they can also get distracted. For example they saw a monitor lizard in the stream here before our friendly (with SK Gombak Utara) and got excited about that, so we had to coax them away and get them focused again.

“Before they joined this programme, many of them were very shy. But the exposure they have received from going out to play tournaments and friendly matches in other states and schools has helped improve their confidence which is good.”

Emir hopes that the talent they produce will go on to continue playing at a higher level once they finish their primary school education.

“I hope they will still have the chance to play rugby when they move on to secondary school. If they can join a school which specialises in rugby that would of course be even better.”

And these Orang Asli teen titans may just power the national team one day.